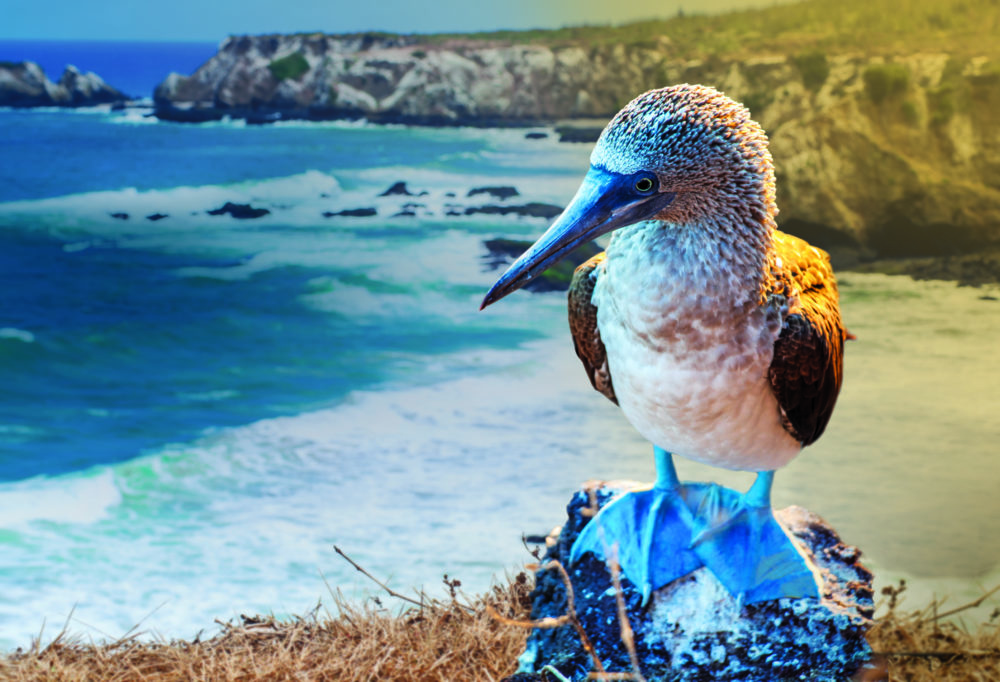 Join us for a 10 day, all-inclusive cruise tour through Ecuador and the Galapagos Islands.

Experience the great unknown in great style. The 100-passenger state-of-the-art ship includes all the amenities of the most luxurious cruises — room service, in-suite dining, massage services, complimentary plush bathrobes, a fitness room, nightly lectures by certified naturalists from the Galapagos National Park (who are on board during your entire vacation), and live music in the Discovery Lounge, you’ll experience the Galapagos Islands in style.

To Guaranttee your space a $450 pp deposit is due before October 3o, 2018 (after this date, based on space availability)

Quito –  Arrive in Quito. Meet your Celebrity Cruises® representative at the airport. Free transfer to the JW Marriott hotel. Enjoy free time to relax and settle in.

Quito – Guided tour of the capital of Ecuador, situation at an altitude of 9,350 feet. Stand on the equatorial line at the Middle of the World Park. Lunch with a spectacular view of the city. Welcome dinner at local gourmet restaurant.

Baltra Island – After breakfast, you will be transported to the airport where you’ll fly to Baltra, Galapagos. During WWII, Baltra served as a military base protecting the Panama Canal from enemy attack. Embark on the ship.

Espinoza Point, Fernandina – The youngest island in the Galapagos and, as Darwin wrote, it is “covered with immense deluges of black naked lava.”

Urvina Bay, Isabela – Composed of five merged volcanoes, this is the largest island in the Galapagos and the most recently active

Vicente Roca Point, Isabela – The half-collapsed remains of an ancient volcano make for a spectacular setting at this site.

Bartolomé Island – offers one of the region’s most photographed views, and is a spectacular geological setting.

Las Bachas, Santa Cruz – Its soft, white sand is derived from remains of coral, shell, and algae, making it a favorite nesting site for sea turtles.

El Barranco, Genovesa – known as Prince Phillip’s Steps, is a steep stairway that leads up through a seabird colony full of Nazca and Red-footed Boobies.

Darwin Bay, Genovesa – Snorkeling is a must here, as the nutrient-rich water attracts all types of marine life including sharks, sea lions, sea turtles, and the occasional manta ray.

Quito –  Your Celebrity Cruises® representative will once again escort you to the airport for your return. Breakfast included.

Package includes 3 nights in Quito, Ecuador and 7-night cruise, all meals, all excursions/sightseeing tours, all gratuities, round trip flights from Quito to Baltra

On Board ship all beverages alcoholic and non alcoholic are complimentary.

NOT Included is your international airfare to and from Quito

*taxes are an additional $120 per person

Disclaimer of Liability: In the absence of its own negligence, Cruisin’ Inc., and Millersville University, its agents, offices and/or suppliers of services shall not be responsible for any cancellations, delays, diversions or substitution of equipment or any act or omission whatsoever by sea or air or land carriers, hotels, cruise lines, transportation companies, restaurants, tour operators, excursion operators, automobile rental agencies, or any other persons providing any services or accommodations to passengers, including without limitations, any results thereof, such as changes in services or accommodations. Cruisin’ Inc., its agents, offices and/or suppliers of services pursuant to or in connection with any itineraries act only as agents for the passenger solely and exclusively for the purpose of making arrangements for hotels, transportation, tours, excursions, restaurants, automobile rentals, or any other service, and does not assume any liability whatsoever for any personal injury, property damage, death, loss accident of delay to person or property due to an act or omission of any sea, air or land carrier, hotel, cruise line, restaurant, automobile rental agency, company or person rendering any of the services included in the tour, or by act of God. Further, no responsibilities are accepted to damage or delay due to sickness, pilferage, labor disputes, machinery breakdown, quarantine, government restraints, political unrest, war, riots, rebellion, insurrection, weather or other causes beyond their personal control. No responsibility is accepted for any additional expense, omissions, delays, re-routing, or acts of government or authority. This agreement shall be construed in accordance with and governed by the State of Pennsylvania. In the event any matter of disagreement shall arise in connection with the agreement, the sole and exclusive venue for such litigation instituted by either party shall be laid in the Court of Common Pleas, Country of Delaware, State of Pennsylvania.